Prior to the arrival of European explorers, the native Atfalati tribes used Portland’s west hills for hunting and gathering, moving about the area in a system of winter villages and summer camps.

The land would have been Douglas fir forest, similar to the Willamette River forests described by William Clark in 1803 as containing trunks ranging from five to eight feet in diameter. The forest would have alternated with open grasslands and meadows produced by thousands of years of controlled burning by a succession of native peoples. By the early 1800s most of the Atfalati had succumbed to malaria and other illnesses.

Neither of these homesteads was long-lived. Both the Stewarts and Mr. King sold off parcels of their land claims to various buyers over the years. By 1868 Multnomah County owned 160 acres of the original Stewart land claim, purchased for a county “poor farm” called Hillside Farm. In 1871 King sold 40 acres of his land to the City of Portland to make a park, now part of Washington Park. In 1889, a forest fire raged through the west hills and burned every building and tree to the ground. 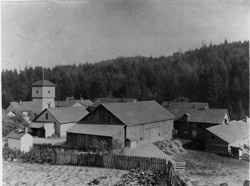 In 1898, Multnomah County established Hillside Farm, a sanatorium for people with infectious diseases and mental illness near what is now the Oregon Zoo. In 1910 scandals involving lax and corrupt supervision and intolerable conditions eventually caused the closure of the facility which was then moved to what is now Edgefield Brewery.

The property was slated for residential development. However, visionary civic leaders sought to preserve the space as a public park dedicated to the growing and conserving tree species from around the world — in other words an arboretum. In 1922, Multnomah County deeded the 160 acre Hillside Farm, then decommissioned, to the City of Portland to expand Washington Park.

A Vision of Parks for Portland

By the beginning of the 20th century, Portland’s urban population would have been surrounded by the bustling flow of commerce and building that marked a growing metropolitan area. Yet for all of the original promise of “God’s country”, much of the natural beauty of their surroundings would have become invisible to most Portlanders by this time. The stately trees lining Portland’s boulevards, the downtown and suburban parks, the large tracts of land set aside for public enjoyment did not exist in 1903. While greenspace still abounded outside of Portland, transportation, time and expense would have put excursions into nature beyond the reach of many Portland families.

In 1903, the Portland Parks Board, a newly-formed committee of citizen volunteers, commissioned America’s pre-eminent landscape architecture firm, the Olmsted Bros. of Brookline Mass., to make recommendations about developing a system of parks for Portland.

John Charles Olmsted’s report to the Parks Board laid out a comprehensive interconnected system of parks for Portland with the caveat that it is always necessary to buy land for future parks to anticipate growing population. Olmsted’s report begins, “All agree that parks not only add to the beauty of a city and to the pleasure of living in it, but are exceedingly important factors in developing the healthfulness, morality, intelligence, and business prosperity of its residents. Indeed it is not too much to say that a liberal provision of parks in a city is one of the surest manifestations of the intelligence, degree of civilization and progressiveness of its citizens.”

Olmsted’s vision of a system of interconnected parks of varying uses and sizes remains the goal for Portland’s parks today. And his insight that parks are an essential element of a prosperous and healthy city has only become more relevant over the intervening 103 years.

An Arboretum for Portland 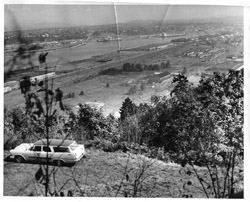 John Charles’ step-father/uncle, Frederick Law Olmsted, who designed Central Park in New York City and Harvard’s Arnold Arboretum in Boston, believed that every region of the U.S. should establish an arboretum. He thought Portland had the most ideal climate for an arboretum west of the Mississippi. Although John Charles’ 1903 plan for Portland’s parks did not stipulate the creation of an arboretum, this vision of a world-class arboretum being established in Portland was probably discussed and thereafter championed beginning in 1911 by then Superintendent of Portland Parks, Emmanuel T. Mische. As early as 1913, Mische began acquiring and propagating seeds collected by the great plant explorer, E.H. Wilson, in China via Arnold Arboretum.

Hoyt Arboretum is named after County Commissioner Ralph Warren Hoyt, one of the strong and visionary personalities who contributed to its creation and the legacy that we all enjoy today.

Some of the other people critical to the creation of Hoyt Arboretum were U. S. Forest Service local supervisor Thorton Munger; founder of Collins Pine Company, E.S. Collins; and Mische’s successor as Superintendent of Portland Parks, C. P. Keyser.

The Arboretum’s founders commissioned John W. Duncan to design a plan for Portland’s arboretum. Duncan had immigrated to the United States from Scotland when he was 18 years old, after serving as an apprentice to his father who was the manager for a large estate and gardens in Aberdeenshire. For the next 15 years, Duncan managed various estates in Massachusetts and Connecticut. In the early 20th century, he served as Assistant Superintendent of Boston’s parks and then moved on to the superintendency of Spokane’s parks in 1909 where a system of parks of over 1000 acres, including the Finch Arboretum. By this time, he had become one of the country’s most knowledgeable plantsmen and horticulturalists.

In 1930, Duncan completed a plan for what would become Hoyt Arboretum. The plan provided specific locations for nearly 40 plant families of conifers (gymnosperms) and flowering trees (angiosperms), and envisioned over 500 species. As befitted Portland’s climate and timber heritage, much of the emphasis was on the conifer collections which comprised more than a third of the collections.

Duncan was heavily influenced by the tradition established by Frederick Law Olmsted in his plan for America’s premier arboretum, Harvard’s Arnold Arboretum in Boston. The Arboretum’s landscape is planned to create both a sense of unity and mystery, alternating open meadows and groves of trees, all appearing relatively natural. At the same time, because of the Arboretum’s educational and scientific purposes, the trees throughout the Arboretum are presented in taxonomically organized groups, surrounded by other members of their same genus, family, and order. 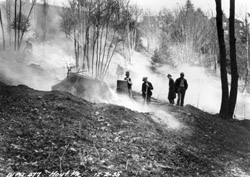 To begin with, it was necessary to clear out the dense second-growth forest of alder, big leaf maple, and the young hemlocks, Douglas firs, and western red cedar that had sprouted up since a catastrophic forest fire in 1889 burned almost everything to the ground. Since it was the Depression, WPA crews were the original workforce.  Some of the 30-year old Douglas firs, Western hemlock, and western red cedar, and big maples were left undisturbed and today give Hoyt Arboretum its unique mixture of native and planted trees.

Trees began being planted at Hoyt Arboretum in accordance with the Duncan Plan in 1931. Some of the earliest collection trees planted at Hoyt Arboretum are the Coast Redwoods (found along the Redwood Trail (between Fairview Blvd. and Burnside Rd.).  These trees some of which are now 150’ tall began their lives as seeds in the Parks’ nursery then located at Mt. Tabor and were planted as 4’ – 6’ specimens in 1931. Today these trees are over 150’ tall although they’re still babies in Redwood terms. Imagine them in another 75 years!

By 1944, all of the 40 plant families listed on the Duncan Plan were represented in the Arboretum, with most of the planting having occurred between 1931 – 1938. Planting resumed at a slower pace after the end of World War II and has continued ever since. 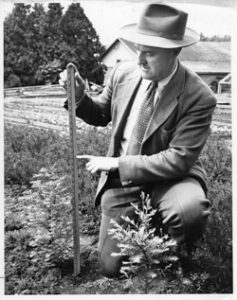 After the first tree plantings Park Superintendent Kayser directed Work Relief crews to the Arboretum and a significant amount of clearing and road building happened in spite of the harsh economic conditions of the Depression era.

In 1940 Ernie Fischer came to the Arboretum, working there until his retirement in 1970. He established connections with other botanic gardens and arboreta, kept meticulous notes and records and the collection grew steadily under his leadership. SW Fischer Lane, which connects SW Fairview Blvd. to W Burnside Street, is named in his honor.

During the 1940’s and 50’s the boundaries of the Arboretum changed somewhat to accommodate a new zoo and roads serving private developments. Land was added to the north to provide a link to W. Burnside Rd. The Portland Water Bureau built the three water tanks at the top of the ridge during this time.

In the fall of 1962 the Columbus Day Storm killed or badly damaged many of the trees and leveled areas of natural second growth. Much of the area required total clearing. One of those who assisted in this process was Jim Bray, who eventually took over from Ernie Fischer. Bray Lane, a gated road leading to the Wedding Meadow, is named in his honor. For many years Fischer and Bray accomplished an incredible amount with very little staff or material support.

In the 1980’s, some of the Arboretum’s land was viewed as “empty” which led to the siting of the beautiful Vietnam Veterans Memorial on the Arboretum’s south slope. This in turn led a group of citizen volunteers to band together to begin advocating on behalf of the Arboretum. By 1986, this group realized that the Arboretum needed leadership, sustainable funding, and advocacy on an ongoing basis and formed Hoyt Arboretum Friends (HAF) as a non-profit organization.

Since 1986, HAF has built the Visitor Center, created the garden which surrounds it and which enchants visitors with surprises and beauty, rebuilt and greatly expanded the picnic shelter which is now the Stevens Pavilion, added the 90+ species holly collection, and added interpretive signs to major collections. These are the permanent changes. In 2009, over 45,000 people used free maps and educational brochures provided by HAF, while many more used the website to download a map and information. People from every state and over 20 countries dropped by the Visitor Center for information and help. And since a garden is always a work in progress, much of HAF’s contributions are to supplement the daily work that trees and plants outside their native habitat require. Twenty-five years later, Hoyt Arboretum Friends or HAF is an integral part of day-to-day operations at Hoyt Arboretum and long-term planning for the future.

HAF, however, is only a conduit for the volunteers, donors, and supporters who care about the Arboretum and are collectively nurturing and sustaining this special place. With its partner, Portland Parks & Recreation, HAF is providing the stewardship that a historical and living garden require.