Spring has arrived in Portland, when new blooms seem to be appearing daily. Not to be left behind, winged creatures have been quick to follow. Leaving a window propped open while typing the day away in productive bliss may reward the patient with cheery chirps, trills, and melodic whistles — a comfortable springtime soundtrack to elevate the work slog. Keep an ear out, and you may be reacquainted with four birds you didn’t realize you already knew!

Of the four species of hummingbirds you may catch a glimpse of in the Pacific Northwest, the Anna’s Hummingbird is the most likely candidate. This species has expanded its territory in the last few decades, possibly due to the support of flowers and feeders in urban environments. Depending on the season it may be found as far north as British Columbia and as far south as Arizona. In Oregon, it can be spotted regardless of the season as it is a year-round resident.

Despite being the largest hummingbird native to our region, it is still considered moderately-sized with a stocky build averaging around 4 inches long. The males are instantly recognizable by their magenta gorget (throat feathers), while the females are slightly more subtle with greyish-brown feathers adorning their heads. Both adult forms exhibit the equally tell-tale brilliant green body feathers. The tail feathers have a rounded edge and run on the broad and stout side. Noticing a theme here?

A short, straight bill accompanied by a proportionately long tongue allows the hummingbird to scoop up nectar in mere seconds. A diet of nectar is supplemented with sap (from exploited woodpecker holes), insects, and spiders. For a special close-up of a hummingbird feeding,  check out this slow motion video from the National Audubon Society.

It may surprise even the novice birdwatcher how straightforward it can be to identify the presence of a hummingbird. Arguably, they may be easier to hear than spot at first. The Anna’s Hummingbird learns its song through imitation, and it is the most distinct of any North American species. The sound is a combination buzz-whistle-chip and can often come off as raspy and squeaky.

If aiming to spot an Anna’s Hummingbird, diligence is essential. These beautiful sparks of watermelon green and pink will be here-and-then-gone in a second—or 53 wing beats.

At first glance this two-toned songbird may seem less intriguing than some of its brightly colored neighbors. It’s estimated that this unassuming sparrow has a population of over 630 million across the continent. The Dark-eyed Junco has a solid black head complimented with rusty-brown colored back feathers, and white-grey feathers cover the underbody. Besides the Oregon Dark-eyed junco, there are a few known alternate variations — the Slate-colored, White-winged, and the Grey-headed Junco — which are all considered varying phenotypes of the same species.

If searching for a junco, look for coniferous trees amongst mixed woods, as that is their nesting preference. They prefer brushy edges, which provide natural protection from predators, and are commonly spotted at the ground level foraging for seeds seeds and insects. Not one to pass up an easy meal, they are a common presence in urban areas, where they take advantage of fallen seeds under bird feeders. Content to socialize with other sparrow species, keep an eye out for juncos joining other flocks of sparrows.

The junco has two types of songs. The first is the louder of the pair: a musical trill that lasts a few seconds, which can be heard from 100 plus feet away. The second song is on the quieter side with a range that extends a mere 40 feet from the original source. The softer song is a series of rapid fire trills similar to a chip-chip-chip call. For sound clips of the Dark-eyed Junco from the Cornell Lab of Ornithology, click here.

The Red-breasted Nuthatch is one of four distinct nuthatch species endemic to North America. They can be found year-round throughout Canada and grace Oregon with their presence throughout winter and into the spring during the breeding season. They are likely to be found among conifer and mixed conifer hardwood forests and from valley floors to timberline. It is common to witness this short-legged bird scaling trees and branches in a head first-manner. These compact birds are known to frequent urban areas as well and show little fear of the unknown and their human neighbors. Nuthatches may venture quite close, provided a lack of sudden movements.

When it isn’t flitting from branch to branch with agility to spare, the nuthatch is a cavity nester who excavates their own nest hole. Once soft decaying wood has been cleared out, the hole will be lined with grass, moss, bark, and feathers. Not to be caught unprepared, nuthatches are the food hoarders of their neighborhood. It is suspected that the current nomenclature for “nuthatch” evolved from the term “nut hack,” which is fitting as their diet mainly consists of seeds and nuts. Keep an eye on the bird feeder as sunflower seeds, peanuts, and suet are all fair game for the nuthatch.

With no time for airs, these narrow-billed birds will happily forage among mixed-species flocks, including chickadees, kinglets, and juncos. Easily distinguishable by their staple blue-grey back feathers and reddish-brown breast, they have white faces with black eyelines and a black cap to top it off.

Catching a glimpse of these seasonal visitors may require a pair of binoculars and bounds of patience. Keep an ear out for the nuthatches’ telltale singing, likely challenging a rival for territory. It sounds like a nasally, high-pitched call sent through a toy tin horn, onomatopoeically described as yank-yank-yank.

When you hear a long kwick-kwick-kwick followed by an unmistakable, repetitive pecking, you typically expect to see a woodpecker. In this instance, the Northern Flicker (or Colaptes auratus) may not contain “woodpecker” in its name – nor does it exhibit the cartoonish red tufts of feathers on top of its head – but rest assured it is a genuine representative of the woodpecker family.

The flicker is fairly large in stature for a woodpecker. It is easily identifiable by swatches of red or yellow, which contrast against its otherwise brown, blue-grey, and black color palette. Initially thought to be a unique species, the red and yellow-shafted Northern Flickers are now classified as variations.

Known to thrive in woodlands as well as urban areas, the Northern Flicker tends to avoid dense, unbroken forest. The overall population has declined since the 1960s due to habitat loss. The main concern, though, is the competition for nesting sites from invasive species, such as the European starling.

Did you know that there is more than one reason why woodpeckers beat wood and other acoustic materials? It is common knowledge that woodpeckers create nests in soft wood for their brood and that they forage for insects in rotting bark. Less familiar is the action of drumming. This can be heard from mid-March through June. It is a form of communication and invites other woodpeckers to meet up with one another. Who knew! The flicker hammering away at the nearby cell tower was also trying to get 5G.

Hopefully, this list of 4 familiar feathers has triggered a few nods of familiarity, but keep in mind that this list is by no means exhaustive. The Pacific Northwest is a plentiful region to jump on the birding bandwagon. If improving your bird identification skills has found its way on your growing list of hobbies, there are a few resources worth taking advantage of.  I recommend checking out what your smartphone’s app store has to offer. Two of my new favorites are the Audubon Bird Guide app from the National Audubon Society and the BirdNET: Bird Sound Identification app by Stefan Kahl. Together these resources provide all that I need on my daily walk to improve my birding identification. I can snap a photo and cross reference with the Audubon Bird Guide or quickly record the trills and whistles around me with BirdNET. Or you can sign up for an online birding workshop to develop your skills.

I wish you happy and fortuitous bird watching as our feathered neighbors usher in another change of seasons! 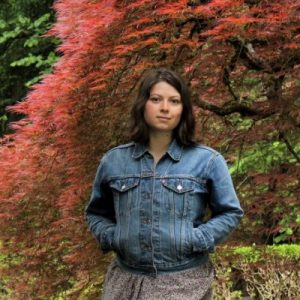 Marissa Shumaker is a volunteer with Hoyt Arboretum’s Tuesday Crew. A native Oregonian, she is an environmental advocate and personal plant enthusiast. She has a B.S. in General Biology from the University of Portland. With a day job that typically keeps her in a laboratory/office setting, she spends her free time volunteering with organizations that support the environment, the sciences, and animal welfare.