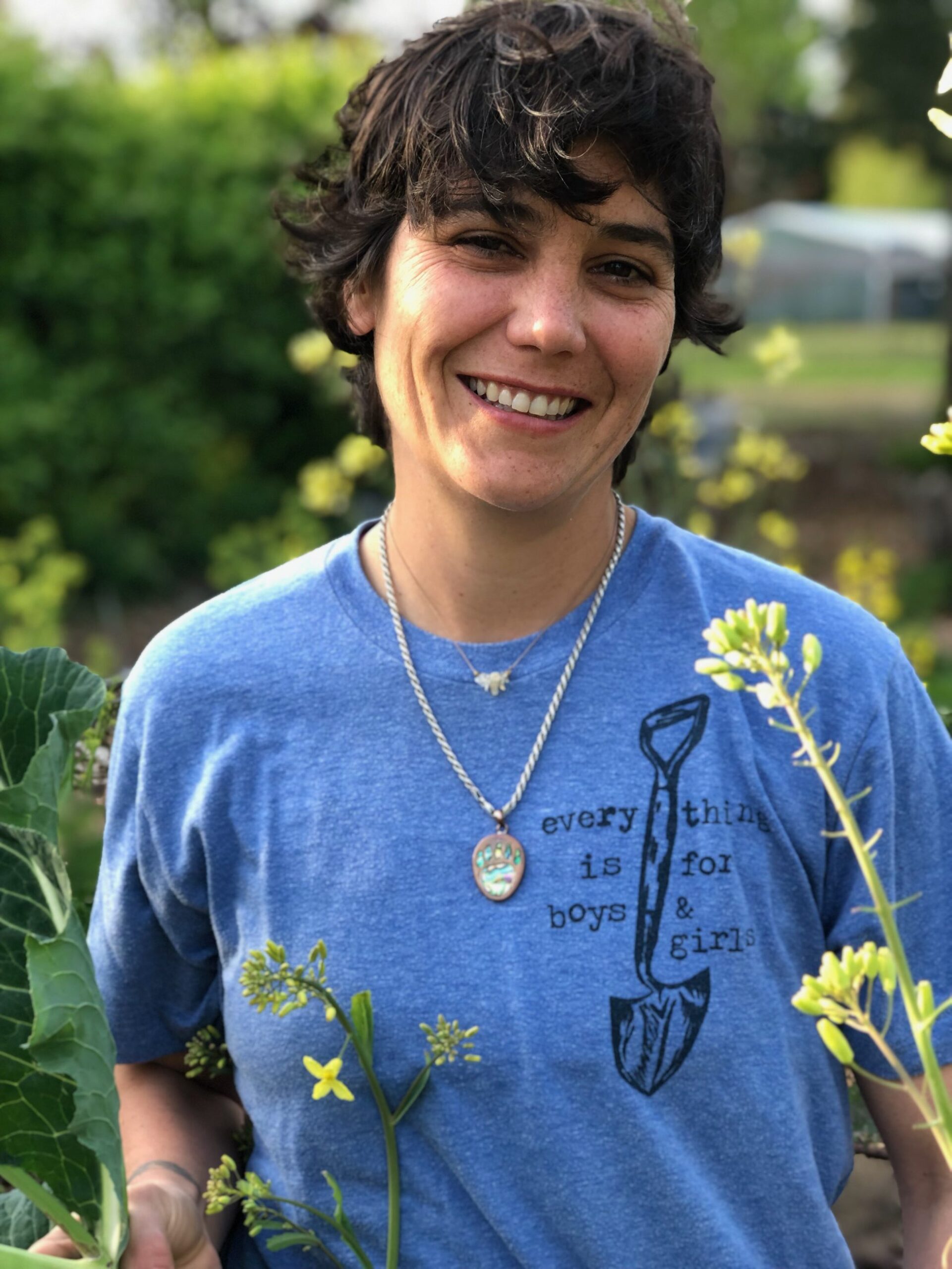 We’re ecstatic to welcome a new horticulturist onboard at Hoyt Arboretum! Allison’s environmental journey began at Stanford in Palo Alto, CA – much closer to Portland’s climate than the subtropical climate of San Antonio, Texas, where she grew up. She joins us via PP&R after spending the last few years creating “culturally appropriate, aesthetically beautiful, and functional” spaces with her portfolio of 15 parks in North Portland.

To avoid tooting our own horns, we’ll let Allison tell it herself: “When I was hired, I told the supervisor I would never leave [North Portland] unless the horticulture position opened at Hoyt Arboretum! I have to say thanks to Mark McKinney for retiring and providing the opportunity for me to bid in.”

We interviewed Allison to learn more about her background in horticulture, some of the projects she’s been involved in, and species she’d like to work with in the Arboretum. We also learned a lot about fruits you can’t find at your local Fred Meyer.

What was your journey to Hoyt Arboretum?

AO: I was hired on as a horticulturist about three years ago, and I was excited to make a big impact on a large landscape. My background is actually in anthropology and environmental education. I went back to school in 2015 to study horticulture and arboriculture. I’m a certified arborist, a qualified tree risk assessor, and I absolutely love plants! I also have a background in organic farming.

I wasn’t necessarily expecting to get into landscape management, but I’m really interested in how people interact in their environment, and I like to create culturally appropriate, aesthetically beautiful, functional spaces. I started in North Portland with a portfolio of about 15 parks, and when I was hired I told the supervisor I would never leave that zone unless the horticulture position opened up at Hoyt Arboretum! I have to say thanks to Mark McKinney for retiring and giving me the opportunity to bid in.

It sounds like there’s a big connection between the study of people and the study of space. Have you had any experiences that exemplify that bridge between anthropology and horticulture?

AO: When I started, Woodlawn Park in North Portland was in dire need of help; the “Horseshoe bed” had been overgrown with invasive plants. But, I could see that there were a lot of interesting, beautiful plants.  I uncovered a lot of Edgeworthia chrysantha, which is a beautiful ornamental. I also unearthed a bunch of Mahonia and Fuschia, made it all nice and pretty and chipped it. Literally one day after the project was done, I saw a family having a picnic right in the grass where we’d been working. That’s what this is all about, creating beautiful places for people to hang out. Who knows, maybe they still would have chosen that spot even if it was covered in ivy…but I like to think they went there because they could see the ornamentals.

AO: Every horticulturalist has a different answer, but for me, an ornamental is a plant whose main function is its beauty, but it’s not necessarily a native plant or an edible plant. Still, ornamentals often are pollinators – they often have showy flowers that attract fauna. It might even be something like a red twig dogwood, which is a native but kind of an ornamental too.

Are there any native plants you recommend also as ornamentals?

AO: Mahonia (Oregon Grape). Sometimes it’s overlooked. Its spring flush is a distinct, pretty lighter green. In fall, the leaves take on a red tone. They also flower a beautiful yellow before making a blue berry.

My actual niche in plants is edible landscaping. If you go to North Portland, you’ll find a number of blueberries that were not there three years ago. I like species of Vaccinium (blueberries) because they’re ornamental, edible, and semi-evergreen in this climate.

What are some past highlights or aspirational projects you’d like to do around edible landscaping?

AO: As far as projects I’ve accomplished already, I would say when I was working as the Education Director at Zenger Farm; I installed their children’s garden. That was pretty cool…[Zenger Farm] is an educational farm, and the children’s garden they had before needed to move in order to create a footprint for a new classroom. So we identified a good area and used volunteers to prep the area using all organic methods – no spraying out. It was a lot of hard work, but we created about an acre-sized children’s garden with a discovery area with things for climbing, and then perennial edibles like different berries, raspberries and strawberries. We also made interesting [plant] beds, shapes for all the annual fruits and vegetables that would go in them.

With parks now, I look forward to finding appropriate spots to put in more fruit trees. Sure, fruit trees tend to be needy, but so are roses – and we have a whole rose garden! I know in the Magnolia garden here, there’s two paw-paw trees, which are native to Northeast America actually. They’re not fruiting now because they’re too shaded out, but there might be an opportunity to create a little paw-paw grove in a sunnier area. There are other trees that are pushing the boundary of our hardiness, like loquat – I don’t know if there’s already loquat in the Arboretum, but I’d be super interested in finding an area where it makes sense to plant them.

Is loquat related to kumquat? I’ve never heard of it, but they sound similar!

AO: They do sound similar! I would say kumquat is more of a citrus fruit [than loquat].

Going back to something you said about shade: I know Hoyt Arboretum has persimmons in the Arboretum, and I’m not sure if it’s because they’re in a shady area, but they’re not exactly…the best. I’ve always wondered if persimmons are even meant to be [in the U.S.]?

AO: So there are Asian persimmons and American persimmons. Martin also actually pointed out two medlars (a fruit visually similar to persimmon) to me, up above the zoo parking lots. They’re kind of like a sweet apple – they’re a really weird fruit.

AO: Yeah, and you know pineapple guavas? They’re also called feijoas. Those are hardy here and evergreen. I don’t know if we have any [at Hoyt Arboretum yet], but those are a great plant – even for just creating a hedge. They also make a very beautiful flower, which is edible, and depending on the variety they do fruit here. If you can get a good crop of pineapple guava, they taste really tropical! And it’s always nice to get a little tropical taste here in the gloomy Pacific Northwest.

A lot of the fruits you’re talking about I never even knew of – loquats, medlars, or pineapple guava. There’s a lot that I’ve never seen in a grocery store.

AO: Well, mostly they’re not in the grocery store because they don’t have a great shelf life. But that makes them perfect for grazing, which is why it may be appropriate to find good spots for them [in parks].

Is there any genus of plant you’re especially interested in?

AO: I’m really interested in Hamamelis – the different kinds of witch hazels, I think for their beauty. They’re plants that flower in the winter when there aren’t a lot of other flowering plants, so I think it’s great for pollinators. Also, their seed capsules are super cool because they like, catapult the seeds.

AO: Yeah! I find it really interesting when plants have adapted in unique ways to just be good at reproducing themselves – and as far as rocketing your seed out there, I think that’s pretty sweet.

Is that something you can see with the naked eye?

AO: Oh yeah, you can see it – you can see it better if you google ‘witch hazel seed capsule.” That way you’ll see it in slow [motion], since it happens really fast.