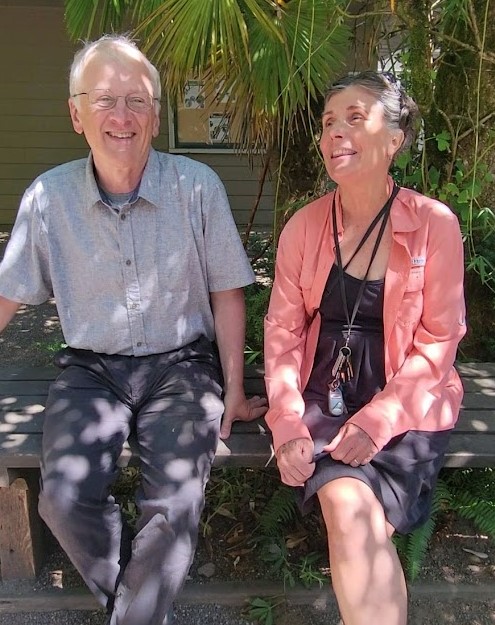 Hoyt Arboretum Friends’ Evergreen Circle is a group of dedicated monthly donors that, like our evergreen trees, are a consistent source of support, joy, and life throughout the year. Two members of the Evergreen Circle, Claire Carder and Jim Scherzinger, took some time to talk to us about why they support, how they support, and some of their favorite species to see at Portland’s living museum of trees.

Can you introduce yourselves and tell me about your history with Hoyt Arboretum?

CC: My name is Claire Carder.

CC: I’ve known about the Arboretum for quite a long time, many years. But it was when I retired in 2017 that I started looking around for fun opportunities to get involved, volunteer work. Notice came by to work as a naturalist at Hoyt Arboretum, and I thought “that sounds fun!”

So I called and applied, and as it turns out, it is my very favorite volunteer activity ever.

What does volunteering often consist of at the Arboretum?

CC: I take school-aged children – generally first through third grade – on hikes in the Arboretum, and I talk to them about what the Arboretum is, when it was established, and all the cool trees. We look not just at the trees, but at creatures that we find or bark that’s laying on the ground, pinecones…we do some games, and it’s just been really, really fun.

Anything you want to add about your relationship with the Arboretum, Jim?

JS: Well, there are some things here that you will not find in very many other places in Portland; and in some cases, you won’t find them anywhere else in the world. And so it’s a special place.

Why do you all choose to support Hoyt Arboretum as donors and as a volunteer?

CC: Well, first, it’s just a fabulous resource for the community. After, you know, kind of struggling for a couple of years of trying to remember to renew my Hoyt Arboretum membership, I just thought, wait, wait, I can just do this with a monthly deduction and that will be so much easier and it will be better for Hoyt as well.

JS: Well, somebody has to support it! [Laughs] But, if it’s something that you enjoy and that you know is valuable, it feels good to support that kind of thing. Not every dollar you spend [on a day-to-day basis] goes to something you really support; it’s nice to have some things that you can support with all your heart.

Why monthly instead of annually?

CC: We were trying to remember when we needed to renew our Arboretum membership and kind of realized that monthly would be easier. I was also happy to up my overall contribution through a monthly donation. It’s ongoing and I don’t have to think about it; [the donation] just happens and it all goes to a really great organization.

One last thing; tell us a little bit about a tree or place that you really like at the Arboretum.

CC: I have a couple; there’s one that’s in a pot at the Visitor Center, and it’s called the Lancewood. It’s a tree that’s native to New Zealand, and it’s the coolest thing because it doesn’t really look like much of a tree at all. It kind of looks like a cactus-related thing.

And then just last week, I found another tree I had been looking for for a long time. I knew it was here – the California torreya, or the California nutmeg tree, which is potentially an endangered species. It’s only found in a few places in California. The Arboretum is just full of these unique, fun, and interesting trees from all around the world. I’m always discovering something new when I come up here, even though I’ve been up here on the trails for some years now.

And Jim, do you have a favorite part of the Arboretum or a place you like?

JS: I just like to walk around, and every once in a while she’ll show me something unique, just like that! And you know, it’s great to learn that kind of stuff.

CC: I showed him the California torreya a couple of days ago!

How would you describe it?

CC: It’s in the yew family-

CC: It has such a sense of itself! It’s got this big, fat trunk with needles that are longer than on a traditional English yew. It just has its very own personality, which is really cool.