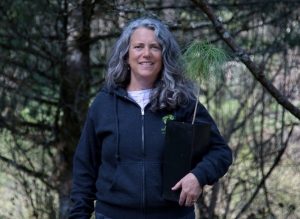 any years in the East before she came back to roost here. College was at Haverford in Pennsylvania, where she majored in sociology. Her mother is from New York so Anna had the opportunity to be with many of her Eastern relatives; an aunt and uncle were professors at Haverford. After graduation Anna was assistant soccer coach at Haverford before she left for Washington DC to work in Peter DeFazio’s office—there is where she met her future husband, Jim Middaugh. Then the League of Conservation Voters was a job Anna had in DC for five years. She loved DC—“a perfect place for a young person.”

Anna moved back to Portland in 1992 to head up the Oregon League of Conservation Voters. She and her husband have two daughters: one is just starting college and the other is just starting graduate school in hydrology. They also have a Lab rescue dog – Maggie.

Before Hoyt Arboretum, where Anna came in 2017 as Executive Director, she had headed the Sauvie Island Center, a non-profit that introduced children to food and farming on Sauvie Island. Asked about what she found exciting about Hoyt Arboretum, Anna responded that it draws really wonderful people—staff, visitors, volunteers—and “there is so much for me to learn.” Her wish list for the Arboretum includes better, dedicated space for education programs and better and more bathrooms.

Do you suppose she has spare time? She is on two soccer teams, she grows veggies in a community garden, she reads, and she is very involved with her family. 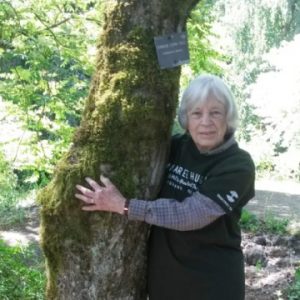