Humans around the globe are understandably preoccupied with the Covid-19 pandemic. But while millions hunker down at home for an indefinite period of social isolation, it’s a good time to recall that people are not the only ones who suffer from pandemic diseases. Trees do as well. In fact, in the 20th and 21st centuries, trees have suffered far worse pandemics than people have, with billions of casualties.

It may surprise you to learn that viruses were first discovered not in people but in plants. Russian botanist Dmitri Ivanovsky proved in 1892 that an infectious agent causing tobacco mosaic disease in tobacco plants was smaller than bacteria. Six years later in 1898, Martinus Beijerinck of The Netherlands showed that the unknown infectious agent was able to reproduce in cells of the tobacco plant. He named the infectious agent “virus” from the Latin word for “poison.”  On a side note, Beijerinck was also the first scientist to show that certain plants were able to fix atmospheric nitrogen into a usable form with the help of microbes on their roots.

Shortly after the discovery of the tobacco mosaic virus, it was noticed that American chestnut trees growing in the Bronx Zoo were dying. After that initial discovery in 1904, chestnut trees soon began dying in an outward spreading wave of devastation. The culprit was the fungus Cryphonectria parasitica, which was believed to have been imported on Asian chestnut trees that can tolerate it and act as hosts.

American chestnut trees (Castanea dentata) were an important component of eastern forests. They were valued for their rot-resistant timber and abundant nut crops that fed wildlife and domestic pigs and cattle. So important were the trees economically that the spreading epidemic drew the attention of the federal Department of Agriculture in 1913.

All efforts to stop the disease failed. With no effective treatment, by the 1940s more than 3. 5 billion chestnut trees are estimated to have been wiped out. The disease kills the parts of the tree above ground. Root systems continue to push forth shoots in a desperate attempt to survive, but inevitably these too become infected and die. For the better part of a century scientists have been seeking to breed resistance into American chestnuts by hybridizing them with resistant Asian species, with some success claimed.

Just as chestnuts were rapidly disappearing from their native range, a second disease was imported that would dramatically reshape America’s urban forests. Tall, vase-shaped American elms had from the mid-19th century on been considered the ideal street tree. Millions of elms shaded streets in the East and Midwest. Hundreds of thousands more were planted beyond their native range in new cities on the treeless prairies and by nostalgic settlers in the Rockies and West Coast. Portland’s first deliberate park plantings in the 1870s were of these majestic shade trees.

The elm-killing disease showed up in Europe just before World War I. The causative agent was first identified in 1921 by Dutch phytopathologist Bea Schwartz, hence the name Dutch elm disease, although its origins are believed to be in Asia. Elm logs imported from Europe brought the disease to New York in the late 1920s. Early quarantine efforts apparently kept the disease within 150 miles of New York City through the 1930s. But as resources shifted to wartime efforts, the quarantine broke down and the disease roared through the nation. Spread underground from tree to tree on intertwined roots and above ground by elm leaf beetles, the disease showed the folly of planting streets with a single tree species. By the 1980s Portland’s elms were also succumbing, although more slowly due to the lower density of American elms here and prompt removal of diseased trees.

The Pacific Northwest’s native trees have suffered heavily from tree diseases. White pine blister rust caused by Cronartium ribicola arrived in the Northwest from Europe around 1910. Spread by wind-borne spores, the disease has wiped out vast numbers of the elegant, long-needled western white pine (Pinus monticola), the state tree of Idaho, as well as whitebark pine (Pinus albicaulis) and sugar pine (Pinus lambertiana). A small number of trees have shown natural resistance to the disease. These are being tested and propagated for reforestation efforts.

Another fungal disease – dogwood anthracnose – was first noticed in 1976 in Washington State, where it infected our lovely Pacific dogwood Cornus nuttallii. The disease has made this tree much less common in Oregon and has since spread to the eastern U.S. where it has decimated native stands of C. florida.

Port Orford cedar (Chamaecyparis lawsoniana) has a very limited natural range in southwest Oregon, but large numbers of cultivars derived from it have long been popular in horticulture. It was from ornamental plantings of Port Orford cedar around Seattle in 1923 that a new disease was first detected. A root rot caused by the plant pathogen Phytophthora lateralis eventually made its way into Oregon and to the tree’s native range, where it has been steadily eradicating Port Orford cedars. Fortunately, some resistant trees have been discovered. U.S. Forest Service scientists identified and collected promising survivors and have helped make seed from these disease-resistant trees available to nurseries and landowners (including at Hoyt Arboretum).

A related pathogen – P. ramorum – was first detected in California and then in Curry County, Oregon at the beginning of this century. Despite the name, the pathogen can infect a wide range of host plants. However, it is especially fatal to tanoak – Notholithocarpus densiflorus – an evergreen member of the oak-beech-chestnut family. Quarantine of the infested area and aggressive removal of infested trees has slowed but not halted spread of the disease.

Sadly, the future may have worse things in store for our urban and natural forest trees. Exotic tree diseases are appearing with increasing frequency, most brought in as unwanted stowaways as international trade has accelerated. But even some naturally occurring microbes are now negatively impacting trees in unprecedented ways; for example, Swiss needlecast disease. Despite the name, this disease of Douglas-fir is caused by a fungus native to the Coast Range. Once thought not to cause disease in Douglas-fir, since the 1990s it has begun to severely damage Oregon’s state tree. Milder winters are thought to be one reason for the fungus’s worsening toll, with more than 300,000 acres a year impacted between 2006 and 2011.

So while we fret about our own human pandemics, spare a sympathetic thought and concern for the disease outbreaks hammering our arboreal brother and sisters. 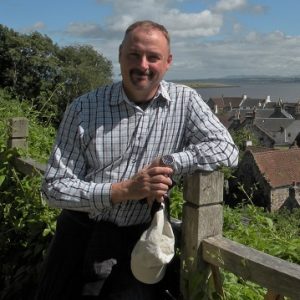 Jim Gersbach is a native Oregonian, long-time Tour Guide at Hoyt Arboretum and former board member of Hoyt Arboretum Friends. He has worked for Portland Parks & Recreation Urban Forestry and currently works for the Oregon Department of Foresty. He plants and prunes trees all over Portland as a volunteer with the non-profit Friends of Trees. You can also catch articles by him in the Hardy Plant Society of Oregon’s quarterly journal.