Does Hoyt Arboretum have redwood trees? We sure do! Hoyt Arboretum is home to three different redwood species, that number about 70 individual trees (including a few cultivars). Most of them are located in the area immediately surrounding the Redwood Deck. Redwood trees are iconic in western North America for their massive trunks (remember those old photos of cars driving through redwood tree trunks?) and for being giant towering trees. But, what is a redwood exactly? 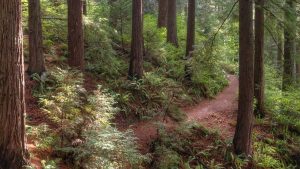 Along the Redwood Trail at Hoyt Arboretum

Redwood trees are suitably named for their reddish-brown colored bark and inner heartwood and are also known for producing wood that is largely resistant to fungal diseases and decay. Their thick bark can hold large quantities of water, which makes the trees fire resistant. There are three species that can technically be called a “redwood,” and we have all three of them at the Arboretum: the coast redwood (Sequoia sempervirens), the giant sequoia or Sierra redwood (Sequoiadendron giganteum) and the dawn redwood (Metasequoia glyptostroboides). The earliest coast redwoods were planted at Hoyt in 1931, and the first giant sequoia was planted in 1933. The dawn redwood was added to the collection in the 50s (continue reading for that amazing story!). 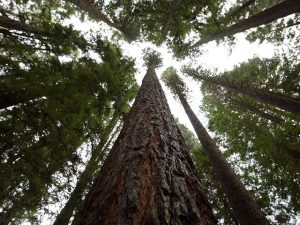 Looking up through the redwoods

All three species were previously grouped together in the Taxodiaceae (the swamp cypress family), but more recent genetic and morphological evidence has grouped the “redwoods” into the Cupressaceae (cypress family), which also include our natives western redcedar (Thuja plicata) and incense-cedar (Calocedrus decurrens).

The coast redwood (Sequoia sempervirens) occurs naturally along the Northern California coastal region, are the tallest trees in the world (often measuring more than 320 ft tall!), and often tower above other large Douglas fir trees that poke up high through coastal fog. How to recognize coast redwood? It has peeling, red, shaggy bark that is typically less than 30 cm thick near its base, and its branches are often downswept. Coast redwood has 2 types of leaves: flattened needle leaves that alternate in arrangement on the stem, and pointed (triangular) awl-leaves along its stems. It is an evergreen tree, with leaves staying each about 3 years, and they fall-off as small branchlets. Woody seed cones mature in 1 year, have shield-shaped cone scales, and are small (often 1 to 3.5 cm long).

Giant sequoias or Sierra redwoods (Sequoiadendron giganteum) are the largest trees in the world by mass (largest trunk diameter), are able withstand fires because of their very thick (often > 60 cm!) fibrous bark, and old trees often have hollowed-out trunks, so trees may still be alive while dead in the middle! Their home range is the Sierra Nevada mountains in California. Giant sequoia trees can be recognized by its leaves that are all sharp, pokey and awl-shaped, and also fall as branchlets. Woody cones are similar to coast redwood, except larger, about 4 to 9 cm long. 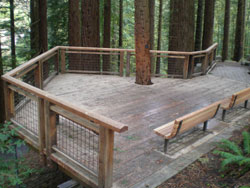 The dawn redwood (Metasequoia glyptostroboides) is one of Hoyt Arboretum’s main claims to fame! It is often referred to as a “living fossil” in that the dawn redwood was once widespread across much of the Northern Hemisphere during the Miocene (5 to 25 million years ago) and was known only from the fossil record. In the 1940s, a small grove of living Metasequoia trees were identified near a small village in central China. From this discovery, batches of seed were soon sent to Arnold Arboretum at Harvard University, who then distributed seeds to several arboreta and botanic gardens in North America. Hoyt Arboretum received a batch of 50 seeds in 1950, and a few years later, one of our trees became the first Metasequoia tree to produce reproductive cones in the western hemisphere for millions of years!

This tree is now identified by a small sign on Bray Lane. As of 2005, the dawn redwood is also the official Oregon state fossil. It is a deciduous tree, with bright yellow-green foliage emerging in spring, and golden yellow leaves that drop in entire branchlets in fall. The dawn redwood is smaller in stature than other redwoods, with its needle leaves borne in flat planes, creating a delicate feathered look. Woody cones are small, about 2 to 2.5 cm long. 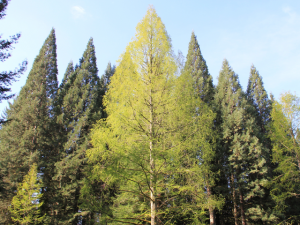 The dawn redwood with bright yellow-green foliage in the spring

So, we have all 3 redwood species here for viewing at the Hoyt Arboretum! Stop by the Visitor Center for a map and instructions on how to find our groves of redwood trees, or simply head towards the Redwood Deck.

And, a cool factoid: What is that weird tree at the northwest end of Bray Lane, near its intersection with the Wildwood Trail? This small tree is about 3 meters tall with thick, fleshy leaves, and it is a strange cultivar of coast redwood, named Sequoia sempervirens ‘Cantab’. This cultivar is a slow-growing compact tree with dense branching and thick, fleshy needles, and was developed from a witch’s broom from the Cambridge University Botanical Garden in the UK. Cantab is short for Cantabridigian, which means “of Cambridge.” Look for it on your next visit to the Arboretum!

Dr. Mandy Tu works for Portland Parks & Recreation as the Plant Taxonomist and Herbarium Curator at Hoyt Arboretum. In this position, she is responsible for collecting voucher specimens and verifying the identity of the trees within the Arboretum and is often asked to identify plants by natural area managers in the Portland region. She has a B.S. in Botany from the University of Washington and a Ph.D. in Plant Biology from the University of California at Davis. Mandy has taught many plant identification courses and workshops for botanical professionals and plant enthusiasts.