In the winter of 2014, I took early retirement after spending a good chunk of my adult life pouring all of my energy into my career until finally deciding I was done.

Shortly thereafter, I replaced a failing hip which had been chronically complaining for several years prior, and I felt a page turning in my personal saga. Recovery was difficult for me, but I was determined to achieve new fitness goals with my new hip, starting with getting to the top of the Pittock Mansion hill from the Cornell Road side. Success came slowly and painfully, and along the way of working to achieve my personal best, I also learned the evils of sweatpants — you wear them too long around the house and eventually realize just how comfortable they remain, regardless of an ever-growing girth.

And so, slowly but steadily, my “personal best” took me along an increasing portion of the Wildwood Trail, reaching Pittock Mansion, braving the mad dash across Burnside, and – finally – arriving at Hoyt Arboretum, a place I had never visited before. Though similar in some respects to Forest Park, I was immediately struck by a sense of thoughtful tending and manicuring of the place. And I wondered more than once where I might find the retail tree nursery on site (at the time, I didn’t know what an arboretum was nor was I that curious to find out more!). 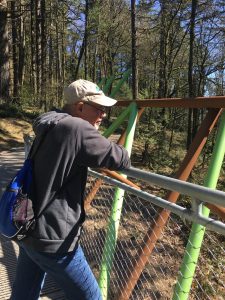 First the Redwood Deck and then the Hoyt Arboretum Visitor Center became turnaround points for me in my pursuit of my personal best distance, which was finally achieved with a zigzag path from Cornell Road to the Vietnam Veterans Memorial and back — almost a 6 mile round-trip. I found the Visitor Center intriguing for a long time — surely the retail tree nursery was tucked in the back somewhere, but they really needed to make it more obvious (and bigger), and what exactly were those people doing all day in that office area behind the Visitor Center?

One day I saw a call for volunteer Trail Rovers and felt another page was beginning to turn. I’ve been a Trail Rover now since 2017 and have enjoyed every bit of it. 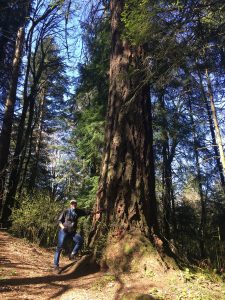 A staff member once commented that there are layers to Hoyt Arboretum, and this simple description has stuck with me. It manifests at one level in the global tree collection (now that I know what an arboretum is!), but also in the park setting for the various stands of these majestic sentinels, in the wildlife always peeking through, and – of course – in the people. The people are the visitors who come once or quite regularly, many from remote corners of the world. The people are the staff, a mix of folks including those focused on the Arboretum and others with a broader charge of land stewardship in Portland parks. And then there are the volunteers – those who give their time, also quite regularly, to upkeep and stewardship and being ambassadors-at-large, surely just for the sheer joy of doing what they do. I know this in part from walking the Arboretum’s trails and reading the inscriptions on benches and leaf-shaped plaques in honor of past volunteers, which describe their journey’s end and their desire to leave their mark in the Arboretum.

I’ve been touched on many occasions while visiting this place, and I have more stories to tell. Accumulated experiences have left me feeling that I too want to leave something of myself here when I pass. I never felt this way about a place before. It often gives me pause, as there is no logic to it, despite being as tangible and real as anything I’ve experienced before. That is the enduring mystery of this place called Hoyt Arboretum. 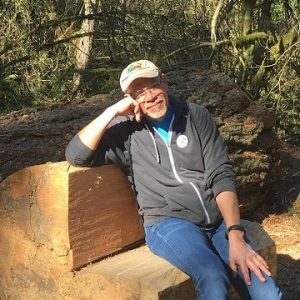 Rover Tom is a retired software engineer who originally hails from Cleveland Ohio, but made Portland his home in 1992, along with his wife and two daughters. He has grown to love Oregon’s outdoors for recreation, reflection, and – of course – volunteering at Hoyt Arboretum. Arriving at a time when Portland was still quite weird, Tom occasionally tries to keep that spirit alive via the many rich interactions he has with residents, visitors, and fellow volunteers.