Have you ever looked closely at a flower and wondered what you are looking at? You are probably familiar with colorful and showy petals, but what are those little doohickeys in the middle? I am going to go over parts of a typical flower so that once you are familiar with basic flower parts, you should be able to easily see variations in flower forms — and that will ultimately help you to discern different plant groups (such as different genera or plant families).

Note: I frequently use the term “typical” flower to represent general floral features. Be aware that there is a LOT of variation in flowers, from number of parts, to fusion of parts, to where parts are inserted on the stem, etc. We are only looking at the most representative forms, so that you can learn parts of a generalized or “typical” flower.

All flowering plants (a.k.a. the angiosperms) produce flowers for the purpose of sexual reproduction. Sexual reproduction in plants typically involves the placement of (male) pollen to fertilize (female) ovules, which then develop into seeds that are encased in a protective “fruit” covering, usually derived from the ovary wall. There are many flowering plants that have inconspicuous (i.e., non-showy) flowers and may be wind-pollinated, like maples, oaks, alders, grasses, etc. Angiosperms that have bright showy blooms are the most well-known, and these flowers are known to attract specific pollinators – bees, hummingbirds, butterflies, bats, etc. – to ensure pollination.

Now, let’s look at a few showy examples of common neighborhood flowers to identify the main flower parts. So get yourself a flower from outside, and we can begin!

Most flowers have 4 whorls of parts. A “whorl” is a ring-like arrangement of similar parts (at least 3+ parts), that arise from a common location (called a “node”) on the stem. You may be familiar with those plants that have whorls of leaves on a stem – for instance bedstraw (Galium sp.) or the true lilies (Lilium sp.) often have a whorled arrangement of leaves.

Typical flowers have 4 whorls of parts. Starting from the outside and working our way inwards, you first have the sepals, which are usually green in color. Sepals mostly function to protect the other flower parts, and when talked about collectively, a group of sepals is called a calyx.

The next whorl of parts are the petals, together called the corolla. Petals are often colored and showy to attract animal pollinators.

Next inward, we have the stamens, which are the male parts of the flower. Each stamen is generally comprised of its stalk, called a filament, topped by an anther which hold the pollen grains.

Finally, in the center there is the female pistil. A typical pistil is comprised of the ovary (at the base) that houses one to several ovules (the “eggs”), which after fertilization develop into seeds. Above the ovary is the style, which can be non-existent to very elongated, and is then finally topped by a stigma, which is often sticky and works to capture pollen. 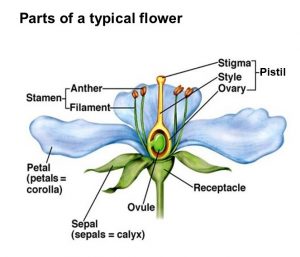 So these are the basic parts of a typical flower! Examples of 3 flowers are shown below: tulip, Mexican orange, and Rhododendron. 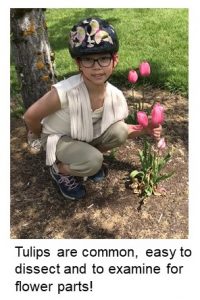 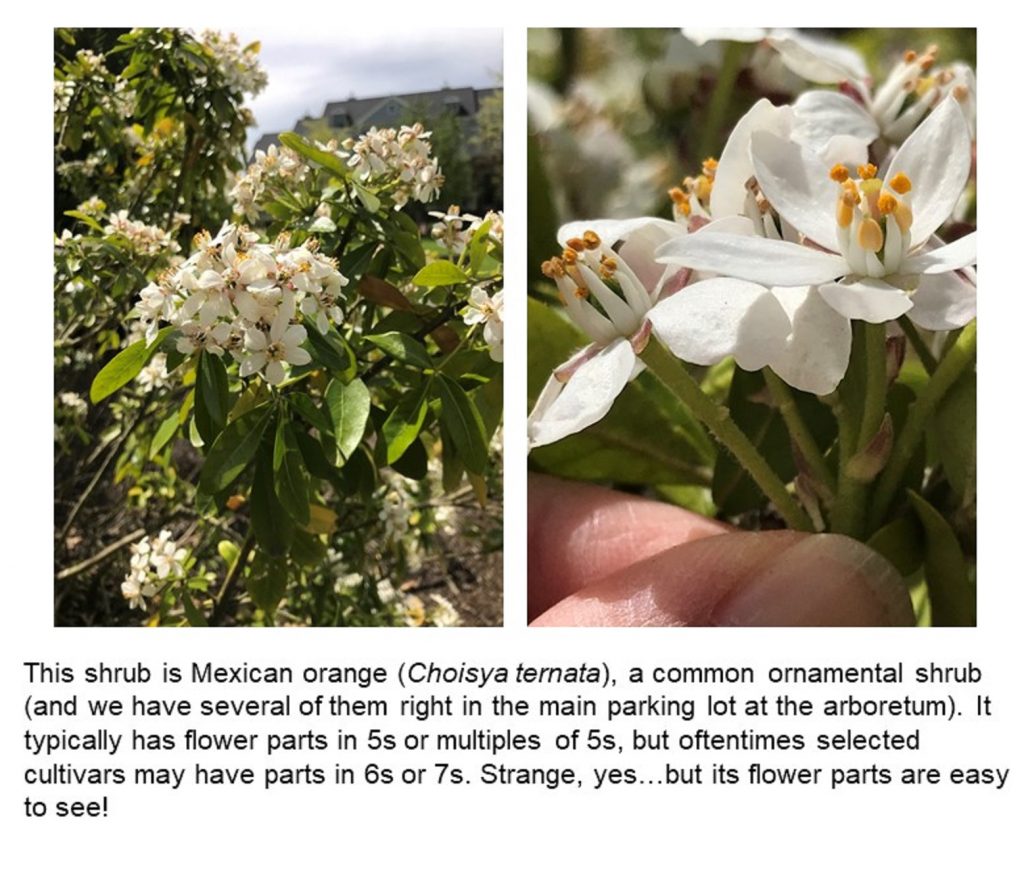 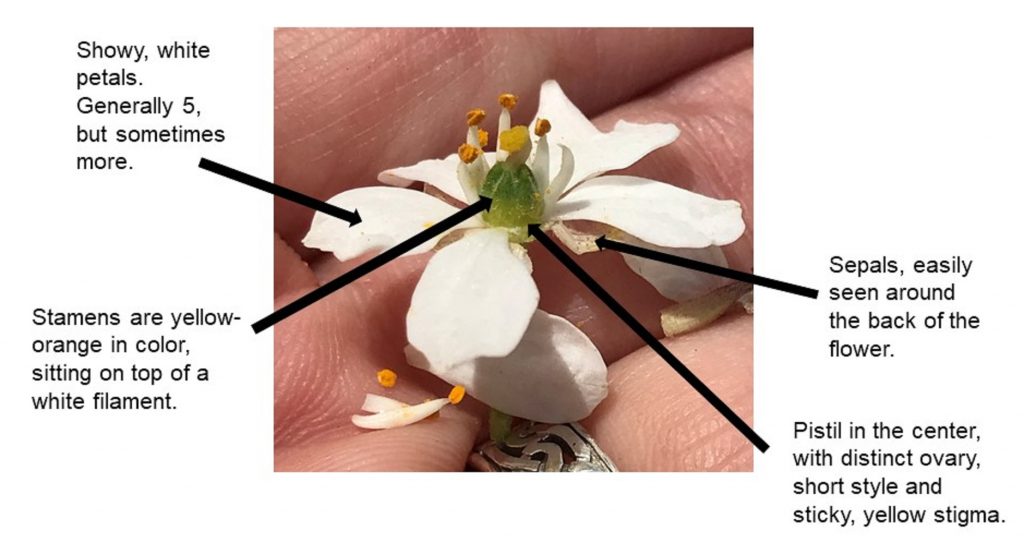 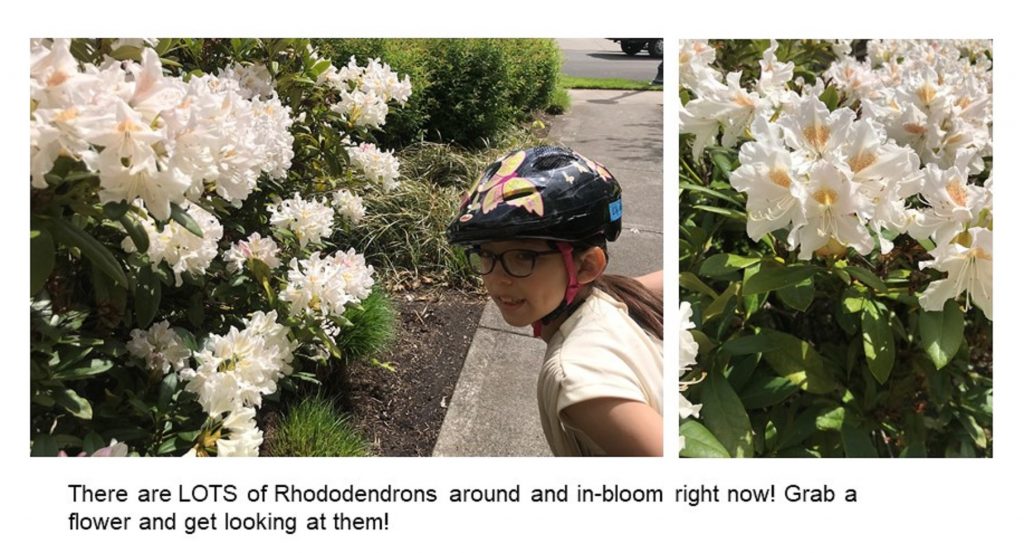 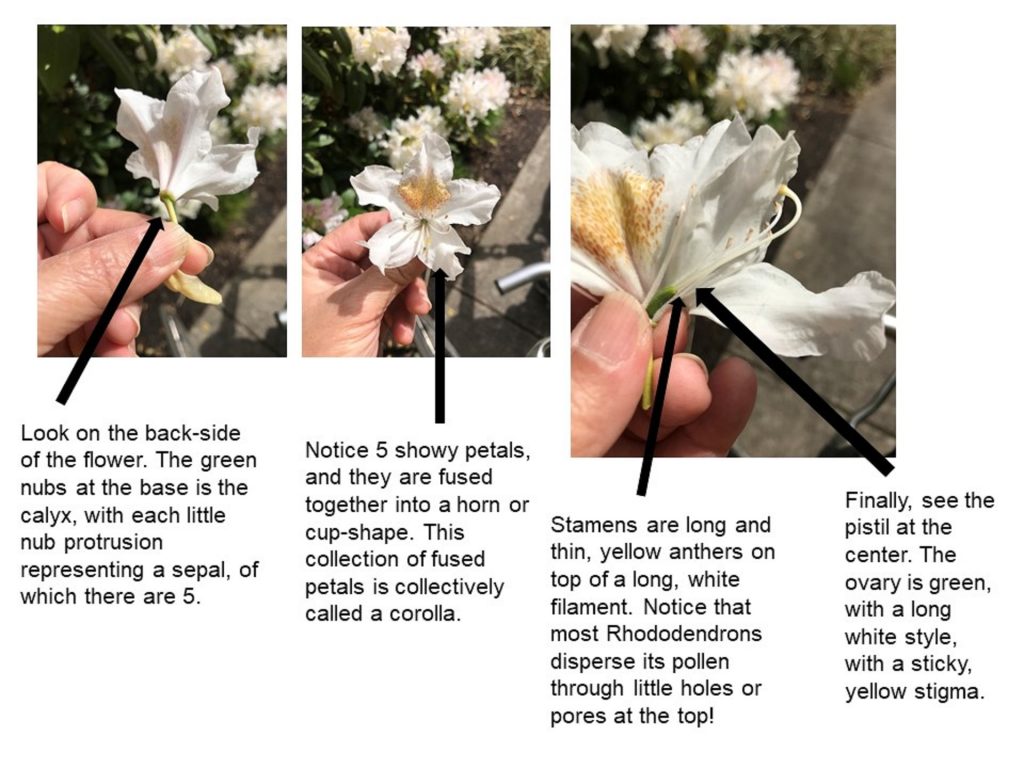 Dr. Mandy Tu works for Portland Parks & Recreation as the Plant Taxonomist and Herbarium Curator at Hoyt Arboretum. In this position, she is responsible for collecting voucher specimens and verifying the identity of the trees within the Arboretum and is often asked to identify plants by natural area managers in the Portland region. She has a B.S. in Botany from the University of Washington and a Ph.D. in Plant Biology from the University of California at Davis. Mandy has taught many plant identification courses and workshops for botanical professionals and plant enthusiasts.