I love seeing the golden colors of conifers in the fall. But aren’t conifers evergreen?

Most conifers are evergreen, but a few species go for the gold in the fall. Like most broad-leaf trees, they are deciduous. That is, they drop their leaves every winter. This adaptation helps the trees survive the freezing cold of winter. On the other hand, most conifers have adapted to the cold by adopting strategies that enable the needles to survive freezing cold.

Since most conifers are evergreen, you don’t expect to see conifers turning golden-yellow in the fall. That is a big part of the charm of deciduous conifers. Mixed in with the evergreens, a burst of flaming gold is an unexpected exception. The color is more striking when it is surrounded by a sea of green.

Most deciduous conifers are larches. Western larch (Larix occidentalis) is the only deciduous conifer species native to Oregon. You can see it growing in the Cascades. It also grows in the mountains of northeastern Oregon and Washington, northern Idaho, and western Montana. Even though Washington is called the Evergreen State, the alpine larch (Larix lyalii) puts on a dazzling display of golden color each fall in the high elevations of the North Cascades.

If you want to see a great display of golden conifers without driving to the mountains, check out the conifer collection at Hoyt Arboretum. The most striking are the Japanese larch (Larix kaempferi) at the south end of the Redwood Trail. Another deciduous conifer is the dawn redwood (Metasequoia glyptostroboides), located at the north end of Bray Lane. It’s commonly called by its genus name, Metasequoia, likely because it is the only species in the genus. Also, no one can say Metasequoia glyptostroboides without taking a breath before the end. Ancient fossils indicate that Metasequoia were once common in Oregon and much of North America and Europe. Living specimens are native to China.

There are two more deciduous conifers native to North America. One is the eastern larch or tamarack (Larix laricina), which grows from New England, across Canada, and in Alaska. The other is the bald cypress (Taxodium distichum), which grows in the swamps of the southeastern United States. You can see a bald cypress at Hoyt Arboretum just south of the Metasequoia on Bray Lane.

Another unexpected deciduous tree is the maidenhair tree, commonly called by its genus name Ginkgo (or species name Ginkgo biloba). The Ginkgo is native to China and is an ancient close relative of the conifers. Its leaves turn bright yellow in the fall. You can see one next to the Visitor Center at Hoyt Arboretum and several growing at the north end of the Bristlecone Pine Trail.

When you are looking for fall colors, be sure to check out the deciduous conifers at Hoyt Arboretum.

This post originally appeared on the author’s Northwest Conifers blog. 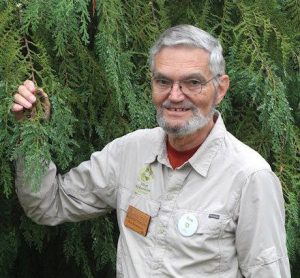 Ken Denniston has been hiking the forests of Oregon for over 50 years and has learned how to identify each species of our native conifers. He has completed the Oregon Master Naturalist Program from Oregon State University and is the author of the Northwest Conifers website. Ken volunteers at Hoyt Arboretum as a public tour guide and provides support for Hoyt Arboretum’s plant database.