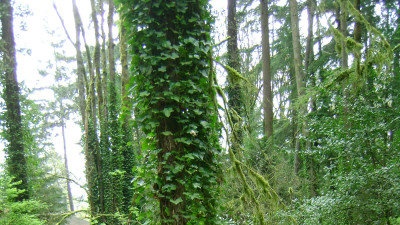 Yes, Spring is here, and everything – plants, kids, daylight hours – is growing at an amazing rate. This is a very stressful time of year for me since all the yardwork, inside cleaning, vacation plans (even if we’re still shutdown, we need vacations!), and summer plans need to be done NOW! But, most important, weeds have kicked into overdrive in my garden, yard, and in the Arboretum.

First question: What really is a weed? I‘m presumptuous enough to think I learned the answer to this question way back in undergraduate classes in geography and systematic botany. A “weed” is a cultural term. It has no scientific basis at all. A “weed” can be whatever is sprouting in your vegetable garden that you didn’t plant and don’t want. It can be grass, it can be kale (I had red Russian kale growing everywhere in my community garden plot), or it can be a more sinister, totally unknown, plant that has sneaked into your garden from who-knows-where and is taking over. A weed is a plant that is growing where you don’t want it to be.

The State of Oregon has assigned very important differences in terms that most folks think mean “weed” but really have different levels of concern and regulatory status. “Noxious Weed” is at the top of the regulatory list. It is a term that carries significant weight in current distribution, management responsibility, and control methods, mostly due to potential of the plant to inflict serious economic damage on agricultural activities, cause harm to humans or livestock, or cause ecological damage to native plant communities. The Oregon Department of Agriculture is responsible for maintaining state noxious weed lists, and in Oregon the noxious weed list is on the internet and consists of three levels of concern. Check it out here.

This is at the State of Oregon level; some regions in Oregon have county weed lists, and only some of the plants on the list are found in Western Oregon and in Portland. There are other more locally focused lists of what plants have been found growing in our fair city, are of concern, and what our local natural resource management organizations are most concerned about. The City of Portland plant list, what to plant – and especially what NOT to plant – is here.

Other terms that can be confusing are “native”, “non-native” and “invasive” weed or plant. Whether a plant is native or non-native (also sometimes referred to as exotic, non-indigenous or alien) only has to do with a plant species’ place of origin — it says nothing about how a plant may grow or behave in a certain environment. These terms are also dependent on scale. In general, we consider a “native” plant to be a species that has resided in the region (Portland-area, Willamette Valley, western Oregon, Pacific Northwest, west coast states, etc.) since at least the early 1800s, indicating that the species was likely present when European settlers first entered the region. Non-native or exotic species only implies that it came from elsewhere (eastern U.S., Europe, Asia, etc.). Note that there are many non-native plant species that are beneficial to humans for food, clothing, street trees, ornamentals, etc.

An “invasive plant” is a term that describes a plant’s behavior in a given environment. Invasive plant species are those whose growth habit or reproductive methods overwhelm and dominate other plants and areas where it grows. English ivy is a great example of a non-native, invasive plant. It gets established and after a period of time, it has covered the ground, other plants and even climbed into trees, which can then topple from the weight of the accumulated ivy. Not a well-behaved plant! The invasive character of some plant species leads them to be listed as a “noxious” weed, but not always (which again, is a regulatory designation).

What does this have to do with Hoyt Arboretum, you may be asking yourself? Hoyt Arboretum is a very unique place and gets lots of visitors. We just love these visitors, and thrive on them because they learn how special Hoyt is, hike the trails, look at trees, look at the plants growing profusely, enjoy their day, leave, and then tell their friends and neighbors what a great place Hoyt is. But sometimes visitors leave little hitchhikers – seeds on their boots, on their clothing, on socks, or on their furry friends, that pop off and find a nice piece of soil to sprout in. So these hitchhikers are mostly no big deal, but the trails need to constantly be monitored for evidence of other less welcome plant visitors. I call them “visitors” because we try to get unwelcome plant guests out of the Arboretum as quickly as we can. And Spring is the season when these little unwelcome guests need to be identified and, literally, rooted out!

It’s not our responsibility, as visitors, to remove “weeds”, noxious or otherwise, from the Arboretum trailsides. However, we can report what we think are unwelcome visitors, when we see them. Not every new plant visitor to Hoyt is a noxious weed, sometimes they are just plants that don’t fit into the native or naturally occurring plant communities at Hoyt. And sometimes they are a new native plant that has just recently found its way back to this cool tree refuge. But we all like to know what new and unusual plants are enjoying the park. That, after all, is what a tree museum is all about. 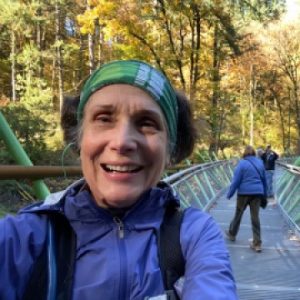 Claire Carder volunteers as a Naturalist at Hoyt Arboretum. A retired environmental project coordinator, she worked to promote landscaping with native plants and ecological restoration. She resides in Southwest Portland, where she loves to hike and jog the trails of Hoyt Arboretum and Forest Park and go on long neighborhood rambles.