Hoyt Arboretum has been a part of Arlena Barnes and Bill Kinsey’s lives and marriage for more than 20 years. Members since 2002, Arlena and Bill have always connected with each other and nature in the wooded trails of Portland, but to them, the Arboretum stands out for its plant diversity and proximity to the city. 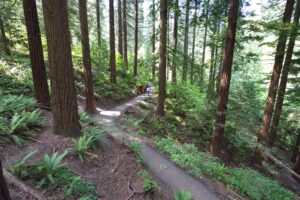 “Hoyt Arboretum is a prime example of preserving, for Portland, a collection of trees and vegetation for residents and visitors. It is our huge park where we can see and appreciate nature’s rich diversity.” They said while reflecting on their Hoyt Arboretum journey from being visitors, to members, to students, to volunteers and community scientists.

Since becoming members of Hoyt Arboretum Friends in 2002, Bill and Arlena are woven into the fabric of the many programs that happen here. They’ve taken classes covering all kinds of botanical topics including but not limited to plant and leaf identification, mosses, and fungi, they volunteer on stewardship crews, and on 2 community science projects. 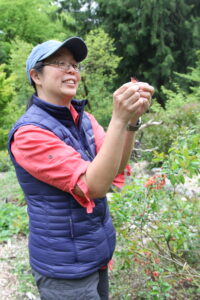 Over the years they’ve developed meaningful relationships with Hoyt staff and volunteers who kept them informed of the different projects to become involved in, Plant Taxonomist, Mandy Tu deserving most of the credit.

“Getting to know biologist and instructor Mandy Tu (shown to the right)) during Hoyt classes, we learned about a volunteer opportunity to record observations about selected trees over the seasons as part of a national project [called] Budburst.  We immediately thought, ‘what a meaningful purpose, and what fun’!”

A Couple That Volunteers Together Spends Years Together

Bill and Arlena have a long history of participating in community science projects, an avocation that has taken them around the globe to places like Kyrgyzstan, Peru, and India for many kinds of biological surveys. So, joining the Arboretum’s BudBurst Team was a natural fit! 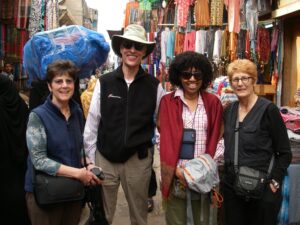 Here Bill and Arlena (middle) are exploring a Bazaar in Egypt while on a biological survey with the organization Earth Watch.

Of their BudBurst experience they said, “The study of particular plants leads to focus on detail, and focus on detail increases appreciation of differences.”

This year, for instance, Bill tracked differences between male and female Oregon ash trees and learned that female trees produce papery winged fruits known as samaras to disperse their seeds, while the males do not. Moreover, male and female leaves exhibit distinctly different shapes.

These learning experiences have increased their enjoyment of the Arboretum, as they’ve become “more aware of the variety in form and function, not only in the plants we studied but also in the many others we observe along the Arboretum’s trails.”

And, they do it all together! A couple that genuinely enjoys spending time together, their community science time is together-time. “As a couple, we compare our thoughts, which makes our observations more robust.”

…”And one volunteer activity leads to another.  We added to our itinerary checks of traps for the invasive Japanese Beetle.  Fortunately, we’ve found none.”

When the name badges are donned and the pair are on the trails collecting data, they are also sharing their experiences and connecting with Hoyt Arboretum’s diverse visitors.

Arlena speculates that as a person of color, others see themselves represented as active participants in caring for the Arboretum.

She’s had many conversations with passersby and encourages people from varied backgrounds and ethnicities to share their unique perspectives–an invaluable element of robust data collection and equitable access to the park. 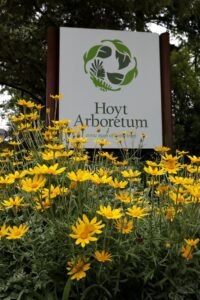 Year after year Arlena and Bill choose to support the Arboretum in countless ways. When asked what motivates them to stay so involved they said it was encouraging staff, but also that,

“We perceive that, as our society grows in appreciation of the environment and concerns about climate change, the Arboretum shines more and more brightly as a serene gem for connecting with and learning about nature, and preserving a healthful environment for present and future generations.”

Together, we can shine even brighter!