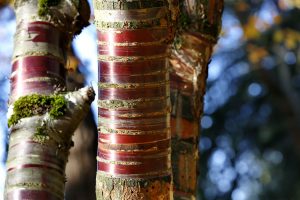 The smooth, glossy bark of younger trees is striped with rings (called lenticels) and, as the tree matures, the bark peels like a birch. Trees grow 20 to 30 feet tall and produce 4 inch long leaves with serrated edges before shedding them for winter. The tree is native to southwestern China and Tibet and is also known as Tibetan Cherry and Paperbark Cherry.  When the tree loses its leaves, the gorgeous mahagony-red bark is impossible to miss. 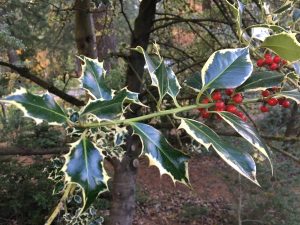 Winter boughs of holly decked the halls of pagans as symbols of fertility and rebirth. Later, Christians adopted evergreen holly and its berries as symbols of their faith at Christmas time. The genus Ilex includes 600 species of shrubs and trees. The more familiar species are evergreen, although some species lose their leaves. English and American holly trees can grow 50 feet tall, bearing prickly evergreen leaves and red berries. Birds may depend on the red berries as a main source of their winter diet. 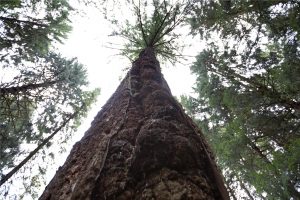 A Pacific Northwest native, the Douglas-fir was designated Oregon’s state tree in 1939.  Although it takes about seven years for a Douglas-fir to grow into an average 6 foot tall “Christmas tree”,  Hoyt Arboretum features many specimens well over a hundred years old. The Douglas-fir is named for the Scottish botanist, David Douglas, who first explored Oregon in 1825 at age 27, then died tragically eight years later in Hawaii at the bottom of a deep pit with a wild bull.

Location: Around the Stevens Pavilion 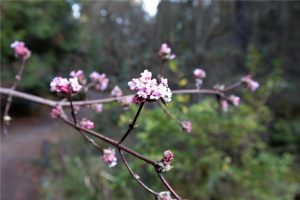 The highly popular Dawn viburnum produces fragrant, tubular, pink-rosey flowers that appear in dense clusters after the plant’s leaves have fallen. The blooms last through winter and early spring and eventually give way to red drupes. The “x” in the name reflects that this cultivar is a hybrid. It is a cross between Viburnum farreri and Viburnum grandiflorum that was developed in the mid-1930s at Bodnant Garden in Wales, which explains the “bodnantense” in the name. Its cinnamon-color bark is striking in fall.