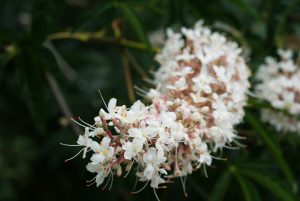 This large, deciduous shrub is a member of the soapberry family and is native to California and Southwest Oregon.  Its striking, fragrant white and pink flower spikes, with 80 or so blooms on each stalk, attract various species of butterflies.  Don’t touch!  The seeds, leaves, and sprouts are poisonous but were used by indigenous people (after boiling the plant parts for several days). The nectar is toxic to honeybees, so beekeepers have to be sure this plant is not in their vicinity. 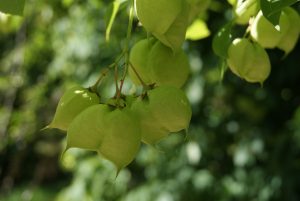 The common name of this large, fast-growing shrub comes from its bladder-shaped seed pods, which contain several large, black seeds. The pods appear after the flowers. The seeds are edible and are said to taste like pistachios. The flowers, which bloom before the plant leafs out, come in drooping, bell-shaped clusters. You’ll see plentiful flowers in years that follow hot summers. The American species likes the warm, wet summers of the Midwest. “Trifolia” refers to the three leaflets composing each leaf.

Location: On Walnut Trail near intersection of Hawthorn Trail Notice the lemon-scented leaves and, if you’re lucky, a fruit that looks like a pale yellow mandarin but with a much tougher rind. The inside of the fruit is very seedy and contains a small amount of very sour juice. Despite being very hardy, it is seldom cultivated but is used as a stock for grafting more edible citrus species. Since it grows to between 2 and 5 meters high, this native to China is in that in-between size that could make it a shrub or a tree. 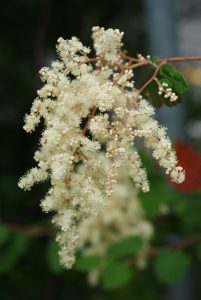 This Pacific Northwest native is seen commonly along roadsides and other disturbed soils in the Willamette Valley and throughout Oregon.  Its common names come from the creamy white flowers that resemble sea foam.  The flowers attract butterflies and other beneficial insects. Notice the many fragrant, five-petaled blossoms.  The small fruits that follow the flowers often stay late into the fall since birds don’t like them.  Coastal tribes eat the Holodiscus’ seeds; use its dense, hard wood for arrows and other tools; and use various parts as medicines.