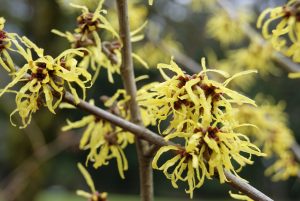 Hamamelis, meaning “together with fruit”, bears both the new autumn bloom of flowers and the fruit from the previous year. With a somewhat spicy fragrance and spidery appearance, flowers can be lemon yellow, orange, or red. Perhaps more impressive than the flowers is the audible, explosive force in which the seeds are launched to up to 30 feet!

Location: Near the Vietnam Veterans Memorial and its parking lot 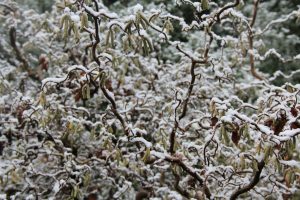 Best observed in winter due to the absence of foliage, corkscrew hazel has twisted branches, twigs, and leaves. Golden yellow catkins hang from the beautifully contorted branches in late winter to early spring. Cobnuts, the edible fruit enclosed in a ragged husk, is commercially grown for nut production, with Oregon being the top producer in the US! 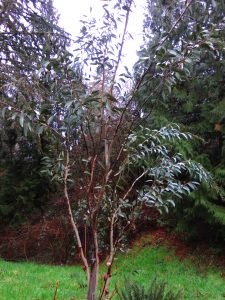 An Australian native, Eucalyptus pauciflora is an evergreen tree with beautiful mottled bark. Peeling off in the summer, the showy patches of white, cream, russet, olive, and gray can be seen in our Winter Garden! This tree’s long blue-green lanceolate leaves contrast with its light bark color, making this tree a year-round favorite. 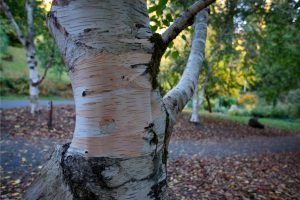 As the name suggests, the star characteristic of White Barked Himalayan Birch is its exceptionally white, papery bark. This variety, from the western Himalayas, is considered the whitest of any birch tree, making it a nice addition to any winter garden! After the buttery yellow leaves fall in autumn, the horizontal lenticels found on the trunk and branches help in identifying this tree (as if the bark wasn’t enough!).