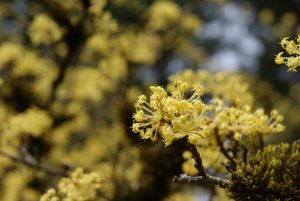 This is one of the “big three” early-flowering shrubs (the others being witch hazel and forsythia). The dense masses of small yellow flowers attract lots of bees in the early season. The berries arrive later in the summer and are often described as being like a combination of cranberry and sour cherry. Fun fact: The wood of this plant is so dense that it doesn’t float. The ancient Greeks crafted weapons from the wood. 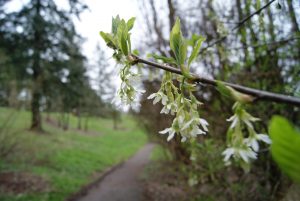 The greenish-white, five-petaled, almond-scented flowers of this large native shrub appear in late winter, before its leaves.  The species name refers to its fruit being in the shape of a cherry (cerasiformis).  When red-purple and fully ripe, the fruits are edible, but you’ll have to beat the birds, squirrels, and coyotes to them.  The common name osoberry indicates that bears (oso in Spanish) also enjoy the berries.  New leaves may have the scent or flavor of cucumber. 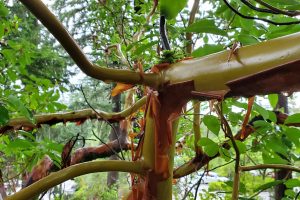 The madrone is one of the Northwest’s most easily recognizable native trees. Its orange-red, papery bark peels away in thin sheets, leaving a green or brown surface. It bears small, white, urn-shaped flowers, followed by orange-red berries. Native Americans used the berries for necklaces, and several parts of the tree had medicinal uses. Like many Northwest plants, the madrone’s Latin name comes from Scottish botanist Archibald Menzies (MING-iss), who noted it during George Vancouver’s voyages. 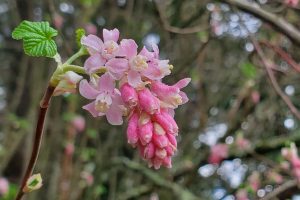 The pink to bright red flowers of this Northwest native are the source of its species name sanguineum (“blood red”). In Oregon and Washington, it can be found mainly on the west side of the Cascade Mountains. The flowers emerge early in spring and have a resinous scent. They attract hummingbirds and butterflies. In the fall, blue-black berries appear and are a favorite of songbirds. Botanical sources describe the berries as “palatable but insipid,” so best to leave them “for the birds.”

One of the most recognizable plants of the Northwest forest floor, Pacific trillium, a member of the lily family, is notable for its bright white flowers that fade to pink or purple late in their life cycle. The name trillium refers to the plant parts that come in groups of three—the petals, the sepals below the flower, and the leaves. Trillium is very slow to develop, taking up to seven years to flower for the first time.