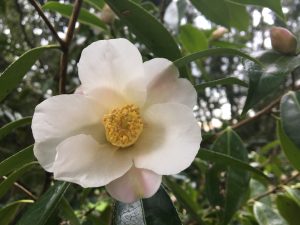 It’s all about the infinite variety of flower forms on these fabulous winter bloomers native to east and south Asia! Several hundred species make up this genus, as do thousands of cultivars. The “double” forms alone include peony-, anemone-, and rose-like structures. Bloom colors range from white to pink to red to yellow. All camellias house a cluster of yellow stamens that stand out against the petals. The name refers to the 17th-century missionary-botanist Georg Joseph Kamel, who introduced Philippine flora and fauna to the Western world. 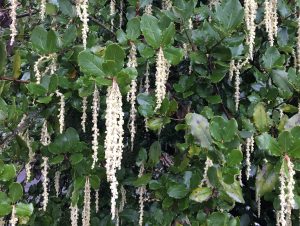 The coast silktassel or wavyleaf silktassel derives its name from the stand-out “silk tassels” that appear on both male and female plants but are longer and more dramatic on the male shrub. These dangling, elegant gray-green blooms appear in winter. The plant is native to southern Oregon and California coastal areas. The scientific name refers to Nicholas Garry, secretary of the Hudson’s Bay Company in the early 19th century, and to the shape of the leaves. 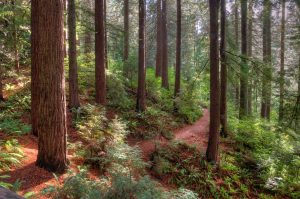 These two different redwoods, native to California, share several “wow” features: long life, huge stature, and a thick, spongy, orange-cinnamon bark whose color comes from a tannin that deters insects. Feel the soft bark—that’s from the water it absorbs. Sequoia sempervirens, or coast redwood, is the world’s tallest tree, able to reach 379 feet. Its cousin, Sequoiadendron giganteum, doesn’t get quite as tall but is larger in girth—the first such trees discovered were as wide as a house. Look at both trees’ foliage—they are quite different! 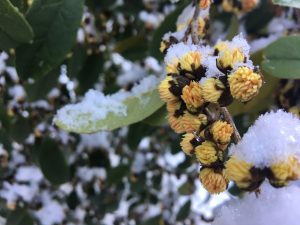