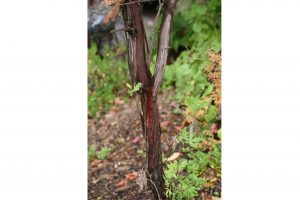 Check out Catalina ironwood’s most dramatic feature–its peeling red-gray-brown bark forming vertical multi-color stripes up and down the trunk. This tree is endemic to California’s Channel Islands, where it grows in isolated groves of cloned individuals. Its unusual compound leaves are shiny and fern-like with noteworthy scalloped edges. Its genus is named for William Scrugham Lyon, the American forester who discovered it in the nineteenth century, and its species name reflects its abundant small white flowers that grow on large flat terminal clusters. 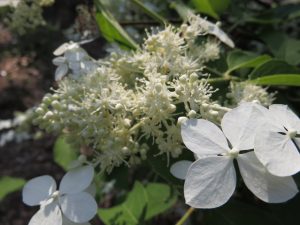 This one’s all about the blossoms! Late panicle hydrangea, native to East Asia, pops in late summer with its big cone-shaped panicles of white flowers. Hydrangea is Greek for water vessel, referring to its fruit capsule shape. The species name, paniculata, describes the form of its blooms—a panicle is a multi-branched flower cluster. This showy plant is popular, easy-to-grow, and comes in myriad cultivars. Note: hydrangeas are poisonous. Ingesting the plant causes diarrhea, nausea, and vomiting in humans and cats and dogs.

Location: On a connector trail between Beech Trail and Magnolia Trail 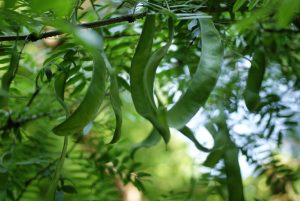 In late summer what stands out about this thornless variety of honey locust is its long, twisty seedpods. Seeds aside, the six- to twelve-inch curvy encasements also house a sweet, sticky substance that lends honey locust its name. The genus refers to eighteenth-century German botanist and physician Johann Gottlieb Gleditsch. This variety offers the best of both worlds—the usual delicate leaves but without the usual sharp spikes. The variety is aptly named inermis, or unarmed. 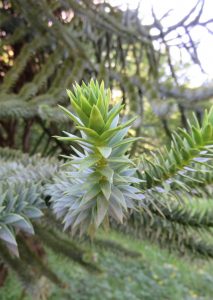 The wild-looking monkey puzzle tree derives its name from an early observer reported to have commented that a monkey would find it puzzling to climb such a tree. How did it get here?  Chile introduced its native tree to Americans at Portland’s 1905 Lewis and Clark Exposition. It first grows in a pyramid shape, and evolves into an umbrella form as it ages. Its reptilian branches house thick, triangular leaves. Named after Chile’s Arauco Indians, the tree is endangered due to logging, forest fires, and grazing.