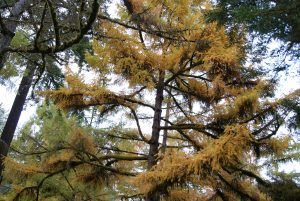 A conifer that sheds foliage in autumn—that’s the Japanese larch! The bright gold that the Larix brings to a mountain slope in fall is breathtaking. Look for its needle bunches: called fascicles, each cluster grows from a small peg attached to the branch. The tree’s genus means larch, and its species refers to German botanist Engelbert Kaempfer, who visited Japan in the 17 th century. Find the small, plentiful cones lining the branches. Larches such as L. occidentalis, native to Oregon, are also known as tamarack. 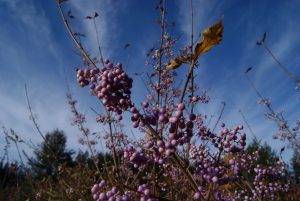 It comes as no surprise that Callicarpa means “beauty fruit” in Greek–or beautyberry to us. C. dichotoma, a deciduous shrub from East Asia, stands out in autumn for its clusters of tiny, showy pink-purple fruit. C. shikokiana, or American beautyberry—despite being from Japan—is different from other species in the genus in that its drupes (botanically different from berries) appear at the end of the stems, not in clumps at the leaf stem joints. Callicarpa is widely popular in gardens. 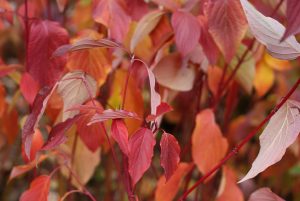 This deciduous shrub—native from Siberia to north China to Korea–shines with color! In fall its leaves turn red, purple, and orange. Once down, they reveal stunning coral-red stems, which brighten up gardens all winter. This striking cultivar, known as tatarian dogwood or Siberian dogwood, is sometimes sold as Cornus alba ‘Westonbirt’ because it was first cultivated at England’s Westonbirt Arboretum in the 1830s. It is popular in England and has received a Royal Horticultural Society’s Award of Golden Merit. 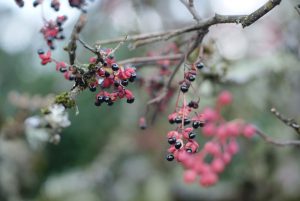 The bark and fruit of the “toothache” tree were chewed by Native Americans for their numbing effect, to mute tooth and sore throat pain. This tree is in the Citrus (Rutaceae) family: its leaves, flowers, fruit, bark, and roots all have a lemony aroma. This species is also called prickly ash due to its thorns and ash-like leaves. The zantho in its genus name means yellow, reportedly for the dye made from its roots, and xylum means wood.

Location: Ramp by the Visitor Center